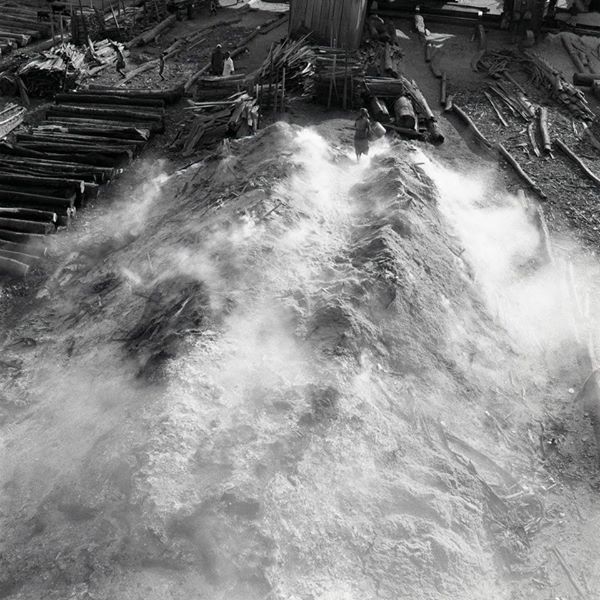 Uche Okpa-Iroha’s series entitled Under Bridge Life comprises images shot under a bridge in Lagos. Just like the title itself suggests, the photographs reflect on the “pulsating, full of energy, suspense and confusion” life in the city of Lagos in general, with its “idiosyncratic infrastructure of roads and bridges which form a complex network” and...

Uche Okpa-Iroha’s series entitled Under Bridge Life comprises images shot under a bridge in Lagos. Just like the title itself suggests, the photographs reflect on the “pulsating, full of energy, suspense and confusion” life in the city of Lagos in general, with its “idiosyncratic infrastructure of roads and bridges which form a complex network” and “the divide or the gap in this spatial order” (Uche Okpa-Iroha) in particular. Most importantly, the series focuses on the people inhabiting this gap and their way of life:

“In this society, the lowly navigate through the socio-economic process of life appropriating what they need, leaving trace behind and charting out new paths for themselves. Thus they create systems of trades, meeting points and places of business. In this way, they attempt to bridge the gap and make the city work for them; to be counted among the demography of the city of Lagos.” (Uche Okpa-Iroha).

Some images are constructed like portraits, with people gathering in the centre and looking straight ahead. Others look more like snap-shots, showing people in movement, caught while crossing the visual field of the image. Even the photographs in which the characters are posing still possess an element that is hard to control, and that is the thread of light coming from above the bridge and entering the underground space through the breech in the construction. It is through this physical break in the construction that light is being (poetically) projected on the floor, under the bridge.

Uche Okpa-Iroha’s photos alternate between studio portraits (group pictures) and street-journalism, between constructed and spontaneous images. This also makes the series dynamic. The photographer doesn’t apply only one way of looking and photographing his subject; in order to catch the complexity and multifaceted nature of the place and its inhabitants he resorts to different methods of composition.

The luminous thread is a very impalpable presence in the underground and could also be seen as a metaphor for the presence of the “nous” (“spirit”, “common sense”, “reason” in Greek). The image of light entering a dark space triggers several associations to other famous images in art history: Plato’s myth of the cave, Christian divine inspiration being bestowed upon believers, martyrs seeing the light of God, scholars or laymen receiving the gift of knowledge, etc.

This thread of light is a fundamental compositional element of the series. Whatever it may stand for, it is beyond any doubt a very strong presence, be it sacred or profane. It also appears to beconnecting the two realms. Having the freedom to move, this thread of light travels from the upper side of the bridge to the underground, from the open space above to the rather claustrophobic one beneath. And, through Uche Okpa-Iroha’s images, back to the surface, in front of our eyes.

In a way, Uche Okpa-Iroha is addressing the question “What is life under the bridge like?” and in this respect his work is photo-journalistic, documentary. And maybe the first step towards answering this question is actually just showing there is life under bridge. The inhabitants of this place may still appear ephemeral, transient and too quick for our eyes to catch, but they do show up and their hard existence under the bridge can nevertheless be traced down. And quite beautifully, as a trace of light.

Uche Okpa-Iroha looks at the bridge from two sides, from two perspectives, thus revealing its complex nature: there is a traffic above, and there is one underneath, made up of moving people and moving light.

The pendant to Under Bridge Life is the less known Beneath mini-series. Although it shows work (the construction of a bridge) taking place above the ground, the photographer is looking at his subject from a high point of view. Hence the title, Beneath. This time the photos are shot in black and white, which emphasizes the presence of earth, dust and wood. The human presence is in strong connection with the amplitude and force of these elements. And force appears to be an attribute belonging to a very volatile element: dust.

There is a sense of mystery and sobriety in this series, a combination of physical energy and almost mythical breath rising from an impressive sea of dust. The black and white underline the contrasting elements of the setting: the human figures appear small and dark in the presence of the white dust surrounding them. The space looks almost theatrical in its display of elements and choreography of contrasts. This is characteristic for Uche Okpa-Iroha’s photographic style.

Uche Okpa-Iroha’s series belongs to both social photography and poetic essay. He addresses local realities and environmental problems in photos which simultaneously look like snap shots and theatre settings.

With the Under Brige Life and its revelation of the bond between the above and the underground worlds of the city, Uche Okpa-Iroha won the Seydou Keita Prize at the Bamako Photo Festival in 2009, when the theme of the biennial was “Frontiers”.