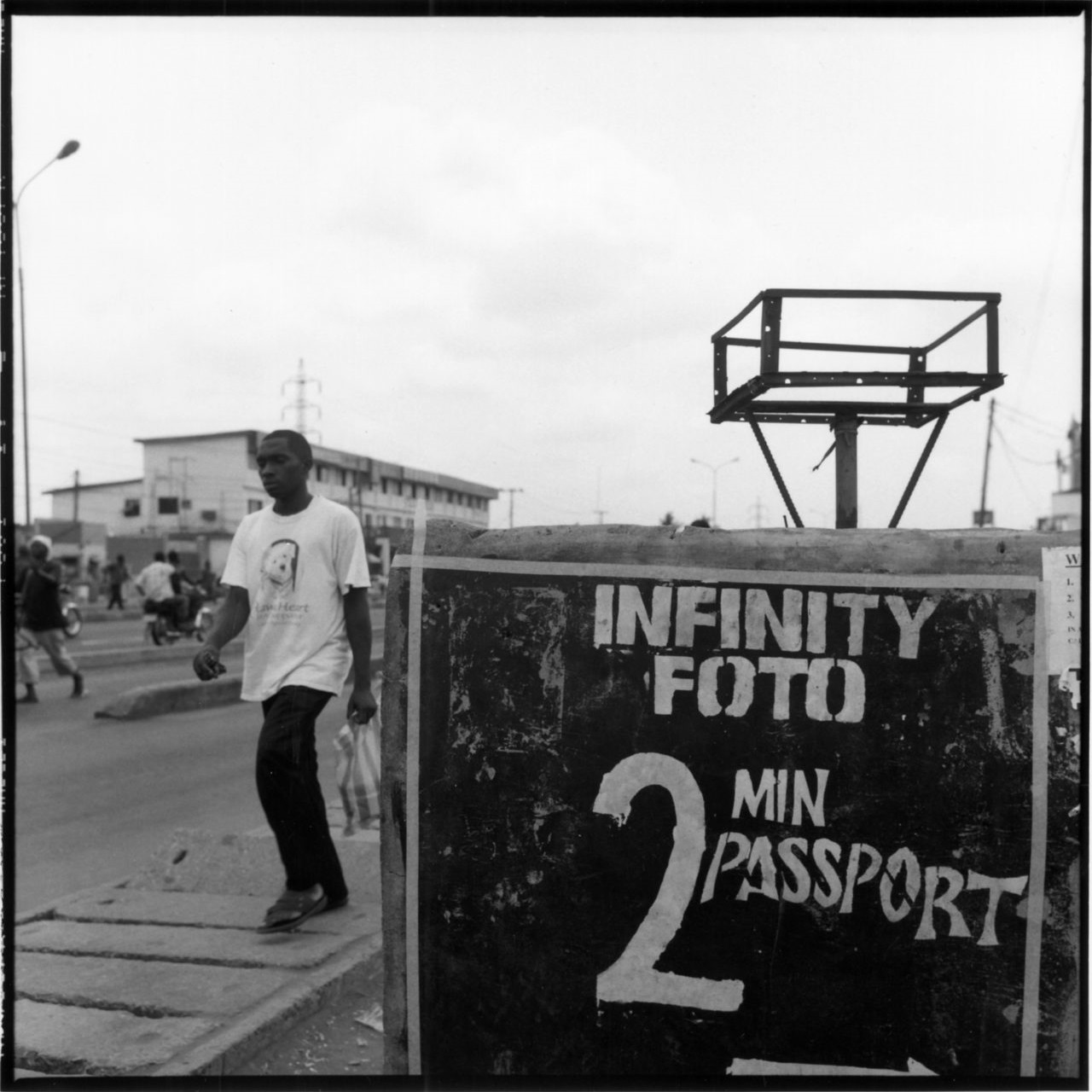 Motto: “How many roads must a man walk down before you can call him a man” Bob Dylan Akinbode Akinbiyi is a photographer of cities: Lagos, Dakar, Addis Abbeba, to name just a few. Moreover, he is attracted by big cities growing bigger, by expanding cities. He sees them not as finished products and static...

Akinbode Akinbiyi is a photographer of cities: Lagos, Dakar, Addis Abbeba, to name just a few. Moreover, he is attracted by big cities growing bigger, by expanding cities. He sees them not as finished products and static spaces, but as living organisms in a continuous state of transformation. His All Road series from the year 2010 has the city of Lagos and its transformations in focus. Each image has a story to tell about the city and the life of its inhabitants.

Thus, in Niedergewalztes Viertel (Torn-down Neighbourhood, 2010), just as its title suggests, the image captures the tearing down of one of Lagos’ neighbourhoods considered to be harbouring criminality. The photographer is interested in the complex situation which this process implies, on the duality of this process of “city cleaning”. One of the paradoxes of urban life is that trying to regulate the city also demands the destruction and annihilation of places considered corrupted. As a result of this many families end up on the road, without shelter, maybe prone to more criminality and injustice.[1]

Strand (The Beach, 2010) shows a woman on the shore, dressed in white and carrying a musical and religious object. Her upper side of the body was left out of the photograph, so what we see is the ocean, a man swimming, his face blocked by the figure of the woman in the foreground, footsteps in the sand and the wooden object indicating music making and religious practice. The shot is taken from a very low perspective, opening the visual field towards the right side of the image, while the left side is blocked by the woman’s body in close-up. The image evokes a wide-spread religious ritual taking place at the Bar Beach. Although the place is known for being over-crowded in weekends and holidays, the image we are contemplating is rather devoid of the agitation one would expect in such a place of leisure in a big city.

Akinbode Akinbiyi’s Lagos is made up of personal discoveries and suggestive details which give rise to further associations. For example in Original Killer, 2010 the advertisement for bug killers draws the viewer´s attention to the woman’s dark shadow and in Ikorodo Road, 2010, taken at one of the city’s most important traffic roads, the local photo studio “Infinity Foto” advertises with a simple board its two minutes passports, thus humourously linking eternity with fast efficiency.

For Akinbode Akinbiyi walking and photographing are intimately link to each other:

“I attempt to move slowly by, always on the look out. My stance is that of the quiet hunter, treading as unobtrusively as possible. The quest is for images that really say something, really tell the story of the urbanscape presently being traversed.”[1]

Photographing in black and white lends these images of contemporary growing cities a classical touch. The photos are taken in the present but anchored somewhere in a future past, a shared visual and narrative imaginary, in which growth, demolition and urban change belong to one common story and history.

“Stories, in German Erzählungen. Each image adds to the overall bigger picture, is part of a much larger whole. At least this is what I wander for. The city space is in many ways an interminable labyrinth, a maze of never ending streets that coalesce into uncountable pathways leading ultimately towards one’s demise.”[2]

Maybe this is also why Akinbode Akinbiyi doesn’t always use titles for his photos. He wants to keep the counting open, to be part of the flow and of the never ending story of images to come. Thus Lagos. All Roads unfolds itself as a very enigmatic title and in the same time defining for the photographer’s style.

“The word uncountable fascinated me as a child, the very notion of things being uncountable, a never ending stream of insurmountable numbers. The Erzählungen of today are intimately connected. The Zahl, the number of things perceived and recorded, photographed in order to tell of the urban labyrinth we all wander within.”[3]

To make a countless number of images, this seems to be in Akinbode Akinbiyi’s view, the photographer’s hybris, who thus becomes kindred in spirit with the Biblical prodigal son. Lagos. All Roads is a generous photographic engagement with a place in its multiple possibilities and realities.

Akinbode Akinbiyi’s photos of Lagos reflect a multi-layered city. His images deal with the obvious and the hidden, with the surface, the detail and the wider picture. His eye is never set on a single way of looking, but adapts itself according to its subject of contemplation. Triggered by a specific object belonging to a particular world his photos manage to widen their significance beyond their context. Akinbode Akinbiyi gives his images the freedom to travel all roads…