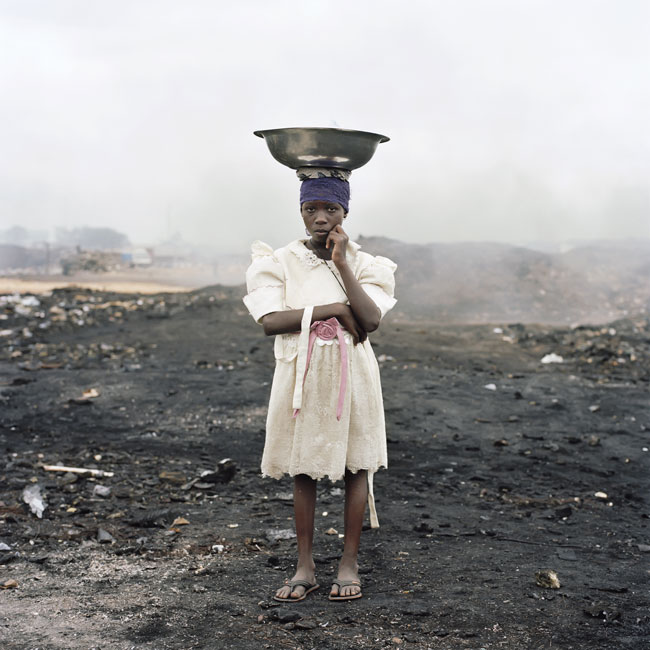 Housed by C/O Berlin the exhibition of the 4 finalists of the Deutsche Börse Photography Prize 2012 offers an insight into the development of contemporary photography. John Stezaker’s miniature photos and ironic collages, Pieter Hugo’s imposing portraits, Rinko Kawauchi’s visual dairy with revelations of the everyday life and Christopher Williams’ interrogation of our modern use of media, all question the medium of photography itself and try to open new perspectives upon it.   Pieter Hugo’s big format photos from the Permanent Error Series are single- or group-portraits and landscape pictures taken on Agbogbloshie Market, a large damping ground for technological waste on the outskirts of Accra (Ghana), a place locally known as Sodom and Gomorrah. Young men looking for reusable materials, surrounded by grey ash-clouds and smoky orange fires. Cows resting on the damping place, facing the viewer, while somewhere in the background two human figures are walking across the field, carrying found material. There are photos of work, where the photographer’s eye catches the inferno-like atmosphere of the place, and there are also photos of rest, like that of a workman sleeping. This closer point of view upon the sleeping person adds an intimate note to this series in which most of the protagonists are shown from the front and in full body.

On entering the generous space of the former gym hall you first encounter Yakuba Al Hasan: a whole bundle of cables crowns his head, on the left shoulder he carries a tire. On the opposite wall there is the photograph of the little girl Naasra Yeti, a bit worried, a bit shy, serious-looking in her wedding-like dress. The young Al Hasan Abukari is also among the photographed workers and his turquoise T-shirt seems to mark him out against the grey background of ash and fire.

Through my African studies I was a bit familiar with the work of Pieter Hugo (b. 1976, South Africa), such as his Nollywood series and the The Hyena and Other Men, 2007 (which made him famous). Some of the main characteristics of his style are also visible here: a precise staging of the portrait; his interest for outsiders and the attempt to document their way of life (such as with the Hyena men before); an aestheticizing effect (a sort of slum-coolness in this case), the ambivalent quality of his images, real and surreal in the same time, fascinating and disturbing. I knew a little what to expect: “the apocalyptic vision” pointed out by critics, the photographer’s “questioning of the ethics of our rapid consumption of ever-new technology and its hidden consequences”. Somehow I was afraid the whole project would stay within these lines. I came to the exhibition to check up on Hugo a little, I confess. After seeing them, his photos convinced me they go beyond the sensational and the disturbing. It is this discovery I would like to tell you about.   To me, the unexpected element in Pieter Hugo’s show at C/O Berlin are his videos. Each of the 3 TV-sets at the entrance to the former sport hall shows a young man (from the collectors of technological waste) trying to keep still in front of the camera for quite some time; behind the posing man, his colleagues go on with their work, undisturbed and smoke keeps on rising from the burning discarded material. At the beginning you don’t even realize what it is you are actually watching: a slow motion video or a photograph.

Juxtaposing two tempos (cinema and still-image in one) and playing with the notions of foreground and background Pieter Hugo’s videos are like unfolded, prolonged photos. We recognize their protagonists form the pictures hanging on the wall and it is as if we are witnessing the making of the photograph. The question rises in our mind: how were the photos taken? did the protagonists have to sit still for a long while, like exhibits in a museum or in an ethnographic show? Through his videos, Hugo questions the virtues and weaknesses of photography itself. Like its almost inhuman attempt to make a person keep still, turn her into a non-moving object.   The strength of these videos resides in the way they simultaneously convey tension and stillness, coolness and endurance. There is something touching and fascinating in the long posing of the young man trying to keep the load on his head in balance. We have been remembered now: photography is a process and it takes time. And photography also brings the world to a still stand.   Thus, Hugo’s videos reveal a connection between life, which is always moving, and the photograph, which is extracted from this continuous flow of human action.   We watch Pieter Hugo’s unflinching, diligent protagonists keep still while the background keeps on moving. The world and the individual. What is the relationship between the still-image and the world, the actual frame around every photo? Where do we, as viewers, intervene?   Addressing timely issues regarding globalization, consumption, waste,Permanent Error is also a meditation on our world, on life. By stressing out contrasts, his images also reveal connections. And, focusing on individuals surrounded by non-functional computers, Hugo’s photos can also feel like a celebration of life.   To conclude: At C/O Berlin Pieter Hugo’s images are in the good company of Rinko Kawauchi’s poetic photos and short videos (Illuminance). With their works both artists offer us a meditation on duration, endurance and lifespan.

The Deutsche Börse Photography prize is awarded every year by The Photographers’ Gallery in London to “a contemporary artist of any nationality who, through an exhibition or publication, contributed significantly to the art of photography in Europe” (http://www.co-berlin.info/). All images in the text: ©Pieter Hugo. Courtesy of Stevenson, Cape Town and Yossi Milo, New York They can also be viewed at: www.pieterhugo.comhttp://www.muntenescu.blogspot.de/2012/12/the-moving-world-real-frame-of-every.htmlhttp://www.artiberlin.de/article/Die_bewegende_Welt_die_reale_Rahmung_jedes_Fo

previous
Conversation with the articulate minds our time
next
Library Request